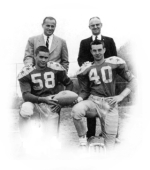 The first Blue-Gold Game was played on August 25,1956. DFRC’s founders, Bob Carpenter and Jim Williams, two local sports enthusiasts who were the parents of children with intellectual disabilities, inspired the game. They wanted to host a fundraising event that spread awareness about intellectual disabilities, while raising funds for programs that serve these children.

The Hand-In-Hand Program was added in 1974 to help the high school participants become more aware and accepting of those who the game benefits - people with intellectual disabilities. Until 1994, the All*Star program included queen candidates representing each of the high schools. In 1994 the Ambassador Program was established to help build greater awareness, leadership, and activity into the high schools.

Today more than fifty public, private, parochial, vo-tech and charter schools across the entire state are invited to participate, helping to spread DFRC’s message of diversity and acceptance throughout their schools and communities.